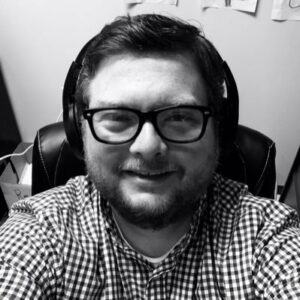 “Peeking Under The Hood”: What Are You Doing and What Is Your Competition Doing? Part 3 of 4

Today is Day 3 on “Peeking Under The Hood”. This is our look at the FDIC’s Small Business Lending Survey that examines how small businesses are serviced by the banking community. Today, we are delving deeper into understanding what banks are doing, why they’re doing it, and what the competition is doing in the same market.  If you would like to catch up, you can read Day 1, Day 2, and the full FDIC survey.
I must admit that I have been pretty tough on community banks over the past 3 days. I’m not apologizing for that fact but I am well aware that there are many good community banks doing some excellent work for their small business customers and making their communities a better place to live and work. For that, you are to be commended…but that doesn’t mean we can rest on those laurels. The world is changing around us and community banks are being attacked by our competition. There really is no other way to look at this data and what is presently going on in the banking industry and assume that “business as usual” is a viable strategy.
However, if there is one thing in which the data shows community banks to be excelling in, it is our commitment to relationship based lending. When the FDIC looked at the data, they found some distinct overlap between large banks and small banks in terms of what they say is their strongest advantage. 85% of both small and large banks said that the ability to talk to a live person, acceptance of walk-in business, community involvement, and customer referrals were practices that they use in their small business markets. That’s good! Those are high-touch, people-first interactions. That is right where community banks live.
But, let’s take a look at the data…because it’s not all sunshine and rainbows for community banks either. 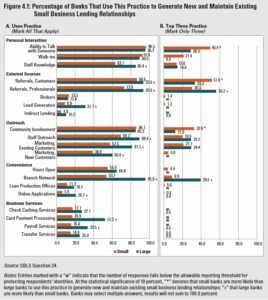 We see the aforementioned qualities are pretty standard across banks regardless of size. Community banks have always known we do that…but big banks are now saying that is important to them. They hardly use their online capabilities to generate new business and never as a “top three practice”. The debate of transactional lending vs relationship based lending is over.
Large banks stress their branch network. 40% of them stress it as a “top three practice”. It would be easy to dismiss this as simply saying “big bank, big reach, big numbers”, but I really don’t think that’s at play here. If big banks were just bigger and running more branches, it stands to reason that they would be doing the same things as community banks. But they’re not. They blow community banks out of the water with nearly every “outreach” option, while I don’t know how to define the “customers” and “professional” designation for referrals but my guess is that “professionals” would be more qualified small business referrals, they are leveraging their convenience products, they do utilize online applications, they rely on staff knowledge more…rather than just being bigger and thus more convenient, it appears they are doing more to tell that story to the right people via the right people. They recognize that physical proximity is crucial, but I would make the argument that they are doing more with it than community banks. They stress the same personal interaction skills, they both say community involvement is a priority, they reach for the low hanging fruit of existing customers (another area they beat us at pretty badly). When we talk about rethinking the branching strategy, this is what I’m talking about here. While I love the Rotary club and buying ads in the high school athletic program, if that is what we mean by “community involvement” then no wonder we think so little of our vaunted and hallowed brick and mortar branches that we barely acknowledge them as a “top three practice”. In short, the big banks are making those branches…profit centers!
Now, before you say “well, I can’t compete with Bank of America’s branch network” so it is not a competitive advantage for us, I would say you are exactly right. So don’t compete with them. You have to be the best in the world at what you do and you probably cannot beat a large bank’s branch network across their trade area. So, don’t. Remember yesterday about re-thinking our trade area? With that more narrowly defined focus, how does your branch network look like now? On that topic, look at “walk-ins”, “Marketing, Existing Customers”, and “Marketing, New Customers”. Where do community banks lead big banks out of those three metrics? Walk-ins. Your branch network is not a competitive advantage because you’re sitting around waiting on business to walk in the door at the same time your competition is marketing to their customers and to yours. And it’s not even a close call. We don’t have to have the biggest branch network in order to win…we just need the one that’s best at delivering value to the bank and the community.
While not a large part of their strategy, large banks use their “business services” products as somewhat of an advantage. Things like check cashing, card payment, payroll, etc. are not going to dynamically change the small business market but they do provide convenience! And community banks have access to them too. If you don’t work with a payroll company or a merchant services company, why not? It’s a numbers game…how many profitable touches can you have with your customer? According the FDIC report, community banks are being “involved in the community”, waiting for walk-in business, and sorely lagging the competition in marketing efforts. Both sizes of banks say relationships are important. It is my assertion that only one size bank is doing anything about showing that to their and your customers.
So, what about the competition? What is it that they are doing? The survey goes on to delve into this by asking what banks perceive to be the competitive advantage of their competitors. It’s a fascinating series of questions, really, because it illuminates what makes their competition difficult to compete with. 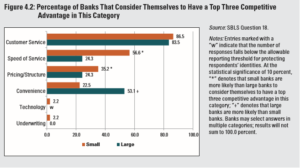 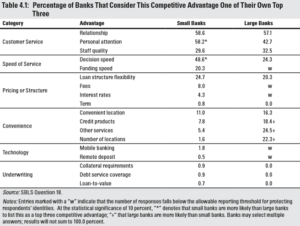 All banks say they have great service. Bigger banks tout their convenience. Smaller banks tout their speed of service which is an interesting comparison and further proof that automated and digital lending is not viable even from the larger bank’s point of view in the small business market. Table 4.1 breaks down what each section means in Figure 4.2. By “convenience”, larger banks mean more products and by “speed” smaller banks mean decision and funding speed given the flatter organizational chart small banks have relative to larger banks. Oddly enough, and I didn’t think this would come up when I first read the report, but it’s a standoff between “service” and “convenience”—two of the most overused words in community banking world in my opinion.
What’s the takeaway here? I’m not 100% certain to be honest. That’s probably not the best answer I can give in an analysis such as this, but it’s the one I’m going with. I would probably lean towards the “convenience” side of the discussion were I a betting man. Customers have a strong lean towards physical location as we have seen but they are also looking for value and a wider menu of products driven by a relationship based approach will probably win out in the end. Notice that I did not say that big banks will beat community banks. Most of those products are available for community banks but we are not out there, statistically speaking, telling our story. Speed will not always be an advantage. Speed can be remedied by FinTech and money. Bigger banks have gobs of the latter. Creating efficiencies is easier for them than it is for community banks. That advantage will change. 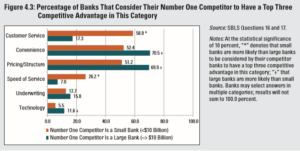 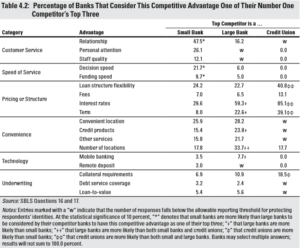 So, let’s end on some good news. Big banks recognize that community banks have them beat, for now, on service and relationships. These two charts show what banks are saying about their number one competitor. If relationships matter in small business lending, then community banks have that edge…and I believe the data there. There is a perception that larger banks have an advantage in pricing/structure…and they do. I think it is odd though that big banks don’t think of it as an advantage the way community banks do. I’m saying this as a lender who lost the biggest loan he’s ever worked on to a large bank that priced a loan so ridiculously low and fixed there was no way we could (or would) touch it. However, the report notes, and I agree, that in this low rate environment and given the stiff competition in the small business market, having a price advantage is not always a long lasting strategy that is viable. While we are on the topic of loan structure and pricing, look at the Credit Union numbers. According to the banks that view Credit Unions as their top competitor, they should be able to price and structure us all out of business! Credit unions are…shall I say…a different story and I’m not going there! I just bring it up to show what other banks are saying.
In conclusion, the relationship still reigns supreme and community banks have done a great job in relying on those and building small business portfolios based on the relationships we have with our customers. However, we have to protect that lead. Those relationships are a more valuable asset than any loan we can make or bond we can purchase. Those relationships are the financial heart and soul of the long term success of the bank and, right now, larger banks are doing a better job at leveraging those high-touch relationship building activities than we are.
I can’t say this enough. Culture is key here to the survival of the community bank. Dare to ask your bank…what if we changed our strategy on branching and redefined our market? What would that look like?
Come back tomorrow for the exciting conclusion to “Peeking Under the Hood”: Products and Practices

Byron Earnheart is the Programming Director for the Barret School of Banking in Memphis, TN and the host of the “Main Street Banking” podcast…the only podcast solely devoted to community banks. He has over 15 years experience in the financial services industry; 11 of which have been in banking in various roles from teller work to branch management. He spends his time playing guitar and singing in Delta Heart (the “house band of the Mississippi Delta”), writing music, cooking, reading, and enduring the University of Tennessee Volunteers athletic seasons. He is married to his wife Kelly of 11 years and has two children, John Aubrey (11) and Mary Laura (7). If you'd like to hear Byron's music, check him out on Spotify: